There is calm at the end of every storm.  Correct?

Photo by:  Robin Souma (below) 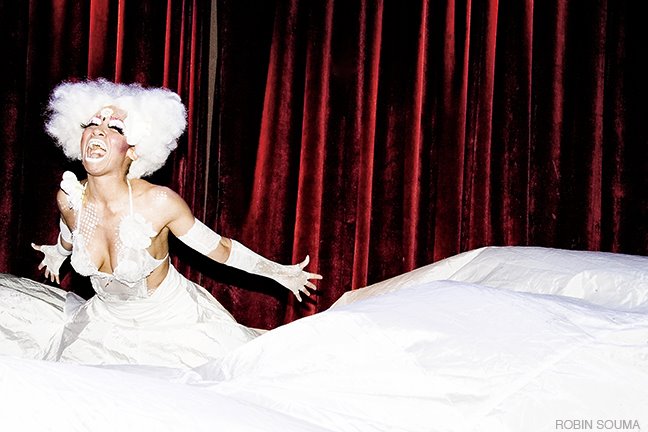 For a couple of months I had to take a hiatus from performing due to very personal issues.  I laid in the dark for weeks in deep contemplation and was not anticipating to come out to perform again.

Life presented me with one of the biggest choices.  I was crippled with emotion and hindered by my thoughts.

I decided after weeks to force myself full throttle back into the light of performing again.

This emergence happened in New York City at the New York Burlesque Festival on September 29th, 2011.

Alone in my hotel room, I was relieved at the fact that I would be performing one of my favourite acts which deals with the light of emergence, renewal and re-birth.  How appropriate given the circumstances.

I felt strong again, there was no turning back.

The opening gala show of the New York Burlesque Festival was held at the Bell House in Park Slope, Brooklyn.  To my surprise for an opening Gala, it was a gorgeous venue.  Supported and enveloped by beautiful wooden trusses and a glorious stage.

I was greeted by some of the most world-renowned Burlesque Superstars.  They were all a breath of fresh air, inspirational and beautiful at heart.  I thank all the amazing performers for putting me at ease.

Once again, I thank New York City for one of the most magical experiences in my life.  Thank you.

Photo by: Robin Souma (below)

Weeks later, I found a review written about my Performance from a local New York Critic in Burlesque Beat:

So give it up to Obskyura for an unusual music choice—Pink fucking Floyd, doing “The Great Gig in the Sky”—you know, that awesome (obviously) black woman having a vocal orgasm?  Obskyura butoh-d up her body and rose heavenly from a gossamer white parachute covering the stage, and mimed the music and became it, a truly cathartic act that took everyone for a ride, escalating to a savage roll around the stage that proved she’s possessed by true abandon.  I particularly liked the (possibly accidental?) detail that the body paint created – a pattern on her dark skin after the lace came off.  Delicious.

Photo by: Melody Mudd (below)

Photo by: Robin Souma (below)

I go forth from here.